Alison Leiby wrote an entire show about getting an abortion, and how it was a straightforward decision and a relatively ordinary moment in her life. And yet, as she recounts in the show, when she called Planned Parenthood to schedule that abortion, she found herself barely able to say the actual word, ultimately whispering it into the phone.

That’s one of the examples Leiby gives in “Oh God, A Show About Abortion”To demonstrate how abortion still feels like something that must never be spoken about – even though it’s an experience that so many people have every day, for so many different reasons. Running through June 4 at the Cherry Lane Theater in New York, Leiby’s 70-minute, one-woman show covers a lot of ground beyond the story of her abortion. There are jokes about how candy-colored birth control ads go out of their way to dance around the product they’re selling. Similarly, Leiby points out the absurdity that for those of us who get periods, it’s socially unacceptable to talk about them. She does the math and determines that periods cumulatively take up about six years of our lives. “Someone runs a marathon once. It takes four hours, and they talk about it for the rest of their lives, ”she says in the show. “We menstruate for six years, and we have to smile quietly while we bleed out in a meeting.”

As Leiby explained in an interview, she wanted to trace how we got to this point, and illustrate that if we could talk more bluntly and more often about these related topics, then abortion wouldn’t be so thorny either.

One of the most resonant lines in “A Show About Abortion” is when Leiby laments that we usually only talk about abortion during crisis moments. Certainly, abortion access has increasingly become a crisis in recent years, as Republican-led state legislatures have passed dozens of restrictive laws with the backing of conservative advocacy groups. Last week’s leaked Supreme Court draft opinion, showing the court’s conservative majority preparing to overturn Roe v. Wade, raised the stakes to the most dire degree yet.

In workshopping her show over the past few years, Leiby found that in some ways, it’s easier to talk about the political context of abortion than about the experience itself. “Jokes about the laws, I think, people can stomach a little bit better than like, ‘Oh, here’s what the clinic looks like.’ It just feels a little more real, and I think that makes some people uncomfortable. ”

So it’s noteworthy that Leiby treats abortion matter-of-factly, like when she concludes the whole experience was “anticlimactic.” One of the biggest laugh lines in the show is when she jokes that being asked whether she wanted a medication abortion or a procedure is like being asked “Fries or salad?” Describing the experience of getting an abortion, or even mentioning that you’ve had one, shouldn’t be a huge revelation – yet it often is. (Further proving the point, politicians and celebrities who support abortion rights regularly make headlines for speaking candidly about having had an abortion themselves.)

Leiby acknowledges in the show that her “frictionless” experience of accessing an abortion, as a white, cisgender straight woman in New York City, is not at all representative of the experiences of many people around the country, especially those who are most affected by abortion restrictions and outright bans. But it shouldnt be representative, she said, and the details of her life in the show illustrate “exactly why it’s easy for me, and exactly why it’s not easy for anyone who’s not me, and that’s what’s really devastating about what’s happening.”

If there’s one overarching goal for the show, it’s to normalize the act of talking about abortion in personal terms, which Leiby sees as intertwined with the politics of abortion.

“Even I found it hard to tell people, good friends of mine with no judgment whatsoever. It just felt weird because I was like, ‘Oh, this thing is so secretive, and we do not talk about it.’ It felt like, ‘I had an abortion, ‘”Leiby said, pausing dramatically between each word. “Because we treat it as this big secret, [this] big deal, it lets the people who disagree with it and want to take away our access to it, it gives it more gravity than it needs to have. ”

“I do not mean to negate that there are abortion traumas that have nothing to do with access, and they are about how someone got pregnant or why they have to make this decision,” she went on. “Those things, unfortunately, are even bigger than this. But at least in terms of being able to go get one, it should be very, very easy for every single person who needs one. ”

As a stand-up comedian, a lot of Leiby’s work draws from her own observations and experiences, so there was never a question of whether she’d talk about her abortion, she said. Soon after the abortion in 2019, she started trying out some material in her regular stand-up sets, ending up with about 15 minutes of jokes and details about the experience. From there, she realized “there’s a story here that’s bigger than this event.”

She started writing what became an hourlong show and trying it out at venues around New York in late 2019 and early 2020. The process culminated in a packed show at Union Hall in Brooklyn on March 2, 2020 (which she grimly jokes was almost certainly a COVID-19 superspreader event). When the first wave of the pandemic shuttered comedy venues, comedians got creative and started putting on outdoor shows. But once again reinforcing one of the major themes of her show, she did not feel great about trying out the material outdoors.

“This just isn’t the show I want to scream in a park,” she said. “It’s so deeply personal, and unfortunately to some people still controversial, and it’s certainly also much more adult. In broad daylight in the middle of Prospect Park, I was not going to be doing this material. ”

Once COVID-19 vaccines became widely available last spring, Leiby finally dusted off the show, performing it again in earnest. She also kept tinkering with the structure, with the help of Lila Neugebauer, who directed the current run of the show. According to Leiby, Neugebauer especially helped to “shape the parts that aren’t comedy,” since much of the show’s poignance comes from Leiby trying to express some hard truths that people ought to talk about more.

If the point of the show is that getting an abortion is a routine and commonplace experience, wouldn’t it be radical to start with the abortion, rather than build to it?

“My abortion story is not the twist of the show. It is very much up front, so it does not technically need to be the end. But in writing and rewriting, I was like, ‘Actually, yeah, I think it does.’ And I started being like, ‘Well, how did we get here?’ “Leiby said. “What is the show saying besides this story, and besides the commentary on abortion itself, and the importance of it becoming accessible and easy for everybody?”

It was self-evident that “A Show About Abortion” actually had to be about much more than abortion. At one point in the show, Leiby connects the stigma and the gravity attached to abortion to the way, for example, aggressively alarmist magazine covers warn cisgender women about our ticking fertility clocks. She then unravels how societal and cultural pressures position motherhood as the default expectation, and how not wanting to be a mother is still often perceived as an aberration. It would probably be easier to talk about abortion, she says, if motherhood and womanhood weren’t so tied together, and if choosing to be child-free weren’t so stigmatized and subject to judgment.

For Leiby, that was even more challenging to talk about in her show than the subject of abortion. There’s the delicate dance, she said, of figuring out “How do I say the things I want to say, but without alienating people?” – such as making it clear that “I’m not trying to shit on motherhood. I think it’s just not for me. ”

“I still think the hardest line in the show is saying that I do not want kids, because you can feel people be like, ‘Oh, really?'” She said. “That response is always well-intentioned – not that I hear people say that in the crowd. But when you tell people interpersonally ‘I don’t want kids,’ they’re like, ‘Oh, but you would be so great.’ It’s like, ‘OK, no, I wouldn’t.’ ”

“But that’s people saying, ‘Oh, I like you, and I would want you to make more you, and also be happy, and I assume that women can only be happy if they have babies. ‘ I think that’s what people are expressing when they are disappointed that you do not want kids, ”she continued. “Then there are people who are like, ‘Oh, well, you just do not know until you have a kid.’ It’s like, ‘Yeah, but what if I don’t?’ ”

It’s telling that even in her show, Leiby has to justify why she’s sure she does not want kids – with a funny bit about how she could not keep a cactus alive, after purchasing it at a store called GRDN. (“GRDN, we have a PRBLM,” she quips.)

“There should not be 10 minutes of comedy to follow that statement. “But there is because I need to help you understand why, so that you’re not feeling bad for me,” she said. “I think we still pity women who do not have children, or say that they do not want children, in a way that’s like, ‘No, do not. I’m good, I promise. I’m happy. ‘”

“If we unpack that stuff a bit more, then the idea of ​​abortion has less gravity,” Leiby said. “I think part of the discussion of abortion that we miss is we’re such a natalist culture, and we’re so obsessed with the nuclear family and with motherhood and women having it all – ‘all’ being baby and career.”

“I think that’s just not correct,” she went on. “If we can unpack a little bit of that and destigmatize being child-free a little bit more, then abortion just makes more sense in our culture, because ‘Oh yes, of course, she does not want to be a mother, and she ended up pregnant, and she should not have to be. ‘”

“Oh God, A Show About Abortion” runs through June 4 at the Cherry Lane Theater in New York. 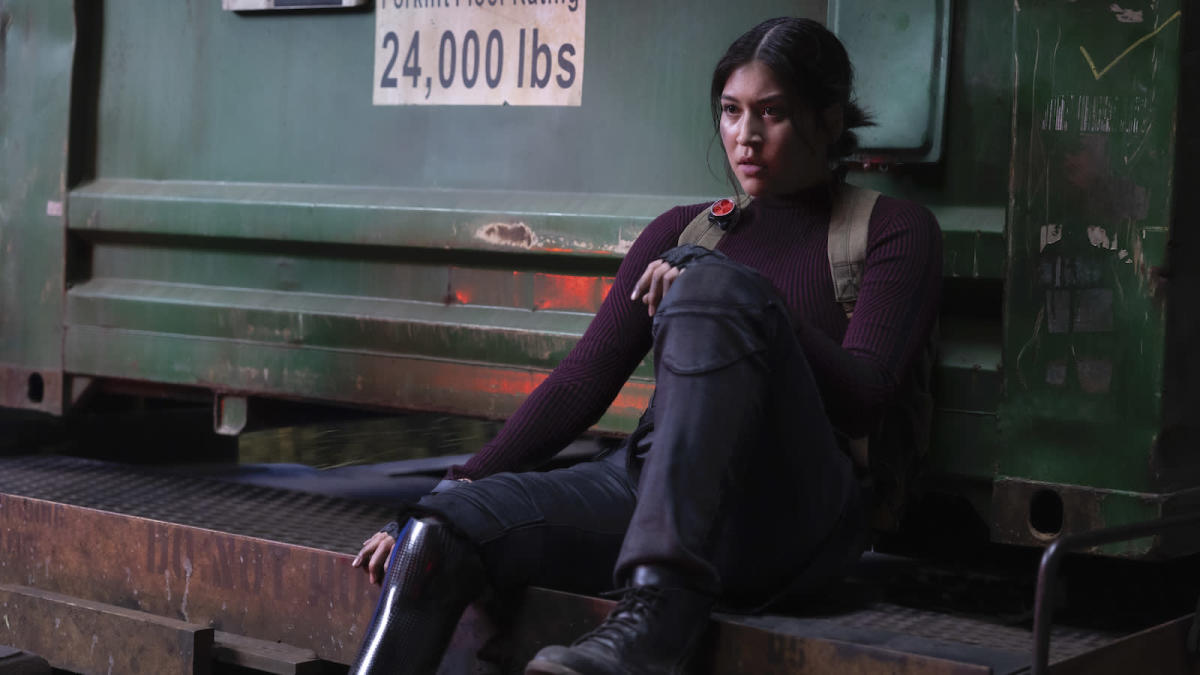