Today the US Patent and Trademark Office officially published a series of 46 newly granted patents for Apple Inc. In this particular report we cover two Project Titan inventions relating to a next-gen interior lighting system and an exterior cracked glass detection system. In addition, we briefly touch on the iPhone’s User Interfaces for reporting an accident or hazard in Maps and the Apple Watch Optical Sensor Subsystem. And as always, we wrap up this week’s granted patent report with our traditional listing of the remaining granted patents that were issued to Apple today.

In the first of two Project Titan patents granted to Apple today, Apple describes a future lighting system with adjustable lighting throughout a vehicle.

Illumination from a lighting system may serve as providing ambient light, may create a custom surface texture or other decorative pattern on a seat or other interior surface, may include icons, text, and other information, and may include custom gauges.

Illuminated regions may overlap sensors such as capacitive touch sensors, force sensors, and other sensors. The light-emitting diodes in a lighting system may supply light that passes through openings in a cover layer. The layer may be formed from fabric, leather, or other materials. Lens structures may guide light through the openings. 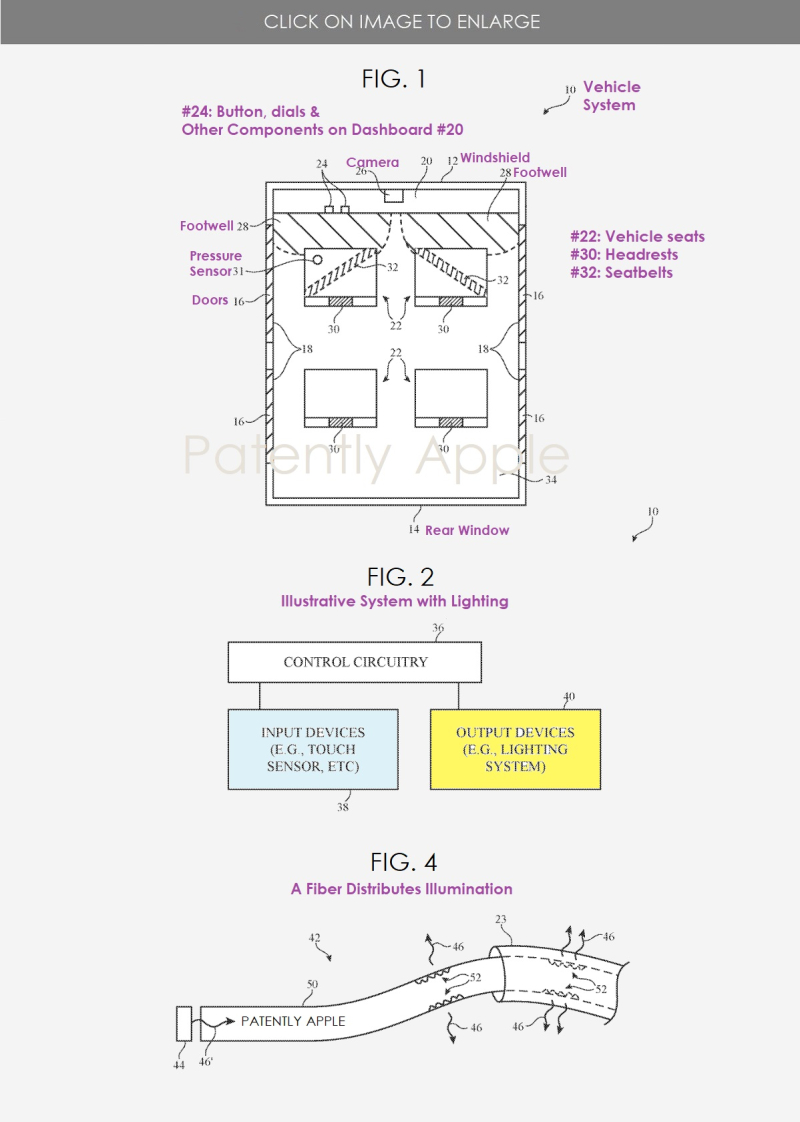 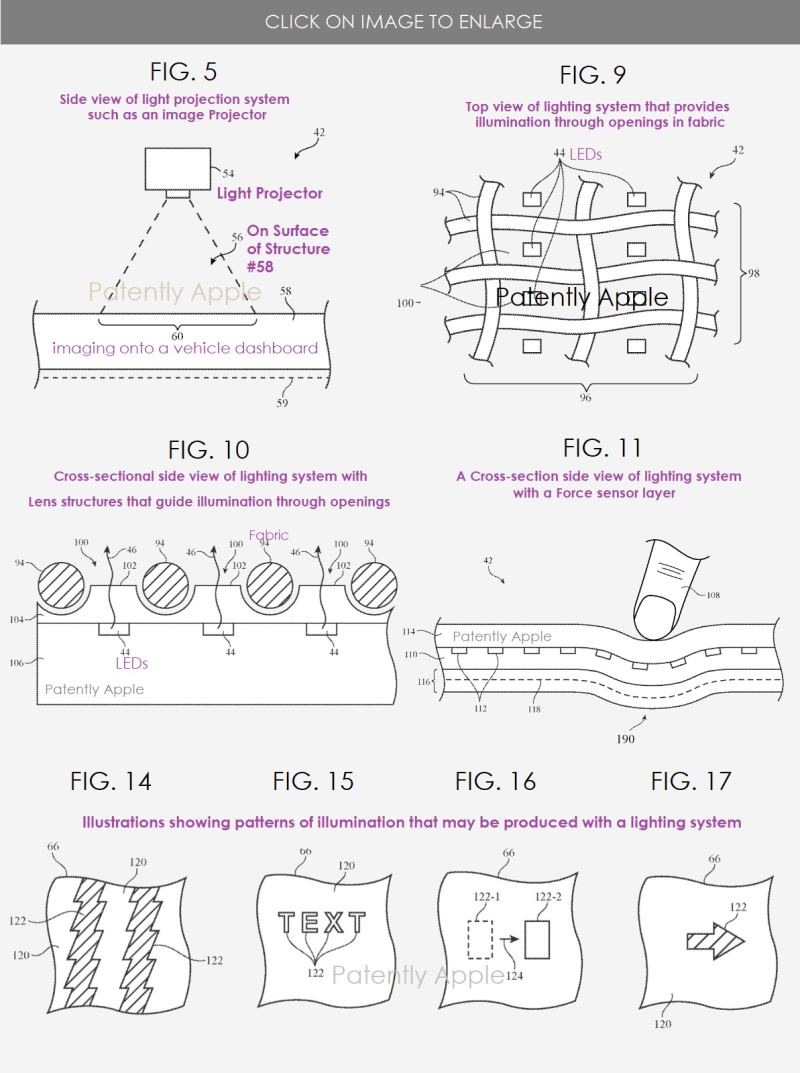 Apple’s patent FIG. 11 above is a cross-sectional side view of an illustrative lighting system with a force sensor layer. FIG. 14-17 represent illustrative text, icons and patterns of illumination that may be produced with Apple’s new lighting system.

Apple was also granted a second Project Titan patent today titled “Systems for Detecting Cracks in Windows,” under patent number US 11506623 B2. Apple’s first granted patent for this particular invention was briefly reported on by us in August 2020.

iPhone Patent on Reporting an Incident in Maps

Apple has been granted a patent for iPhone user interfaces for viewing information about and/or for reporting information about hazards and/or incidents of different types associated with a (eg, physical) location. Review this Apple Support page about this feature. Review Apple’s granted patent US 11507257 B2 for technical details. 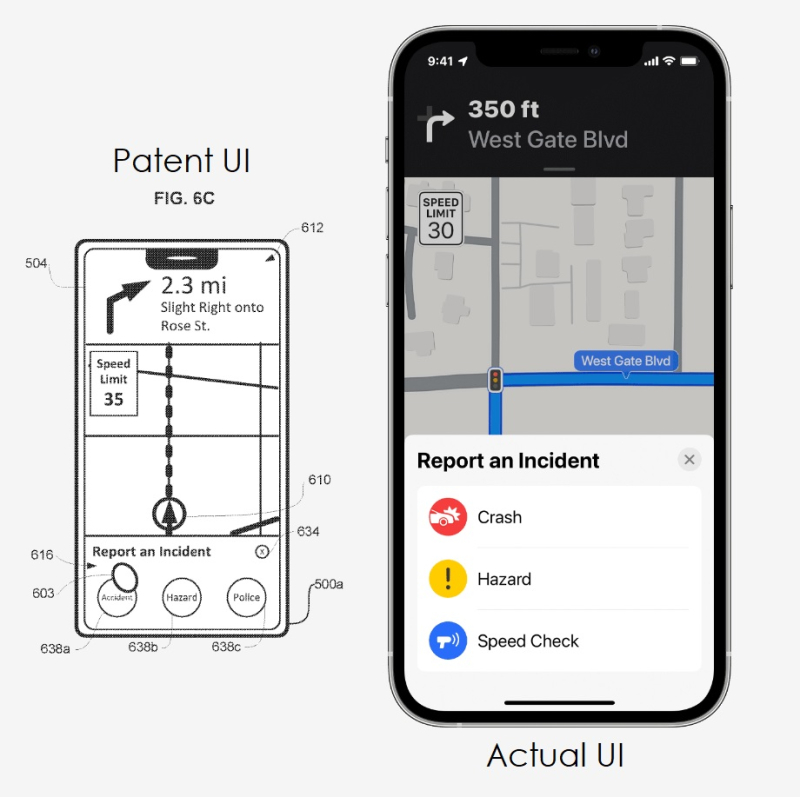 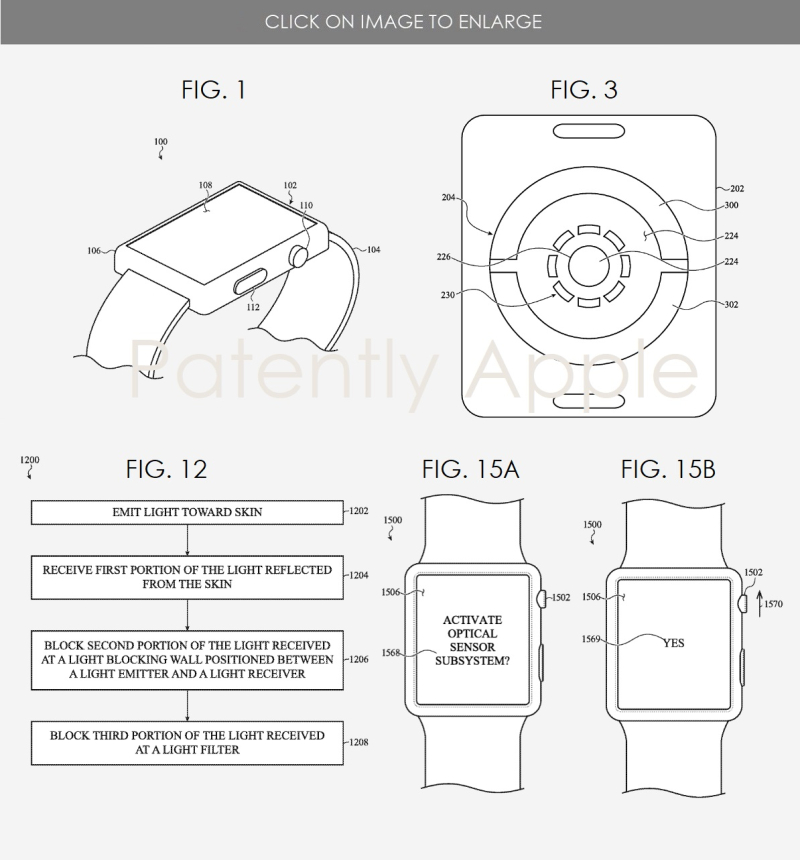 Apple’s patent FIG. 1 above illustrates an example of an Apple watch that may incorporate an optical sensor subsystem adjacent to its cover; FIG. 3 shows the exterior surfaces (eg, the skin-facing surfaces) of the backside housing member and cover; IG. 12 shows an example method of determining a biological parameter of a user wearing a watch or other wearable electronic device.

Apple’s patent FIG. 15A and 15B illustrate possible use of the crown 1502 to change an operational state of the electronic device 1500 or otherwise toggle between inputs. Turning first to FIG. 15A, the display 1506 depicts a question 1568, namely, “Activate optical sensor subsystem?” As shown in FIG. 15B, a lateral force may be applied to the crown 1502 (illustrated by arrow: 1570) to answer the question. Applying force to the crown provides an input interpreted by the electronic device as “yes,” and so “YES” is displayed as a graphic 1569 on the display: 1506. Applying force to the crown in an opposite direction may provide a “no” input. Both questions: 1568 and graphic: 1569 are examples of indicia. As one non-limiting example, a graphic or indication of a heart rate, blood pressure, or the like may be shown on the display in response to the user selecting “YES,” for example by rotating, translating, or touching the crown. 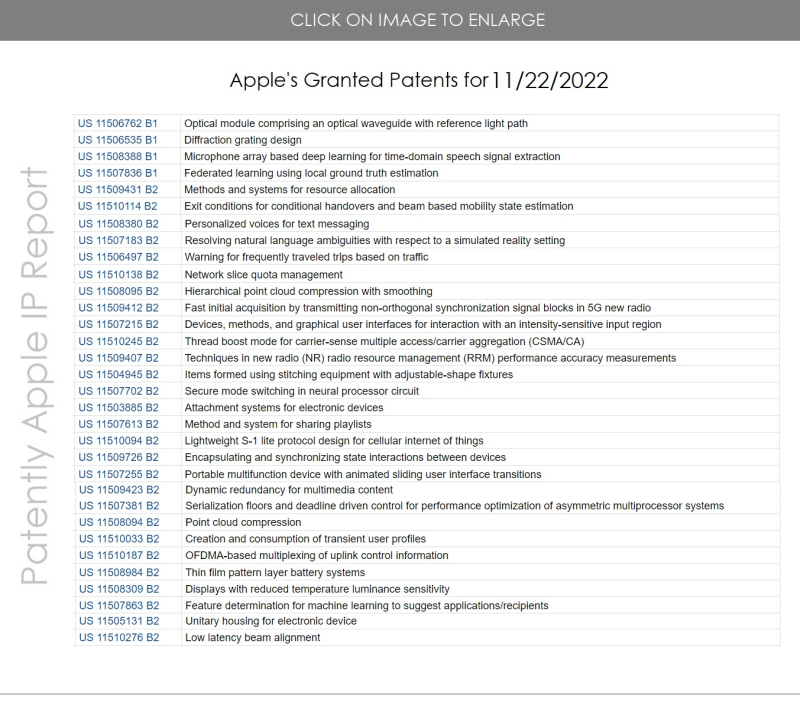