Experiments and simulations explain the unusual nature of the structure’s springiness.

A bird’s nest is a marvel of natural engineering: a disordered bundle of flexible rods woven into a material that is lightweight and springy, yet cohesive. A team of researchers has now used x-ray imaging and computer simulations to explain how a nest-like assembly of short rods acquires its unusual response to mechanical stresses [1]. They found that the friction between strands and the distribution of the strands’ points of contact play a crucial role in determining a nest’s properties. A better understanding of these factors could aid efforts to use nest-like packings of rods in architecture.

A bird’s-nest structure is a kind of granular material, midway between a random packing of compact grains, like rice, and a tangle of stiff fibers, like hair. Granular media made from very short, rod-like particles have been studied previously, but less attention has been given to rods long enough to flex and be interwoven, with length-to-width (aspect) ratios of several tens [2, 3].

Previously, Mattia Gazzola of the University of Illinois at Urbana-Champaign, Hunter King of the University of Akron, Ohio, and their co-workers have examined the mechanical properties of random packings of short bamboo rods poured into a transparent plastic cylinder and compressed using a piston-like top plate [4].

They found that this rod assembly springs back to more or less its original volume when the pressure of the plate is released. But it does so in a nonlinear manner — the deformation (strain) is not simply proportional to the applied stress. And there is hysteresis — the stress-strain curve for compression does not match the one during release. The two curves start and finish at the same places but take different paths, creating a loop. Such behavior has also been seen for the compaction of low-aspect-ratio spheroidal particles [5].

The hysteresis loop implies that during compression, energy is not simply stored by elastic bending of the rods: some is lost as frictional heat as the rods slide over one another, the amount being proportional to the area enclosed by the loop. The researchers saw the same qualitative behavior in computer simulations.

To better understand this behavior, Gazzola and colleagues have now used computer-assisted x-ray tomography to create 3D maps of the points of contact between the rods (which are 76 mm long, with an aspect ratio of 31). The team could track how these contact maps changed during cycles of squeezing and release.

The data showed that as the compression increases, the number of contacts along each rod increases. These contacts restrict bending, so the rods become stiffer with increased compression. This observation accounts for the nonlinearity of the stress-strain curves. The team also observed the sliding and friction of contacts along the rods. There is an asymmetry between the sliding during compression and that during release because of the need to overcome static friction before a contact can move: at any moment, the contact point is trapped by friction away from its most stable state. This asymmetry explains the hysteresis loop.

Some architects are starting to make use of geometrically entangled nest-like structures [6], and King hopes that “offering an explanation for the origin of the simplest mechanical responses will be a first step towards tunability of the stiffness, malleability, or toughness of such structures.” He suspects that “there is tremendous potential for tuning aggregate material properties by varying simple details of the elements.”

Seth Fraden, a soft-matter physicist at Brandeis University in Massachusetts, says that in bird’s nests “there are clearly important engineering principles at play, and it behooves us to understand them.” The new work, he says, “is an important first step” toward that goal. He praises the experiments and simulations, but he notes that real nests aren’t confined by a container, so the direct relevance of these experiments to nature is unclear. Heinrich Jaeger of the University of Chicago, a specialist in granular media, agrees, adding that the small size of the structure means the behavior may have been strongly influenced by interactions between the rods and the container walls.

King agrees that the walls have an effect, but the team is currently assessing how the structure’s properties change with size and hopes eventually to extrapolate them to an “infinite nest,” one that is free from boundary effects. He adds that it remains to be seen what makes a structure like this self-supporting. Perhaps it depends on the details of the packing procedure, he says: nest-building birds “are known to bend and tuck in sticks that poke out of the edges of a nest under construction, [which] could conceivably give rise to a self-supporting structure. ”

Philip Ball is a freelance science writer in London. His latest book is The Modern Myths (University of Chicago Press, 2021).

Waves of vibration moving through the walls of a pipe can carry orbital angular momentum that could be used for several purposes, according to new theoretical work. Read More » 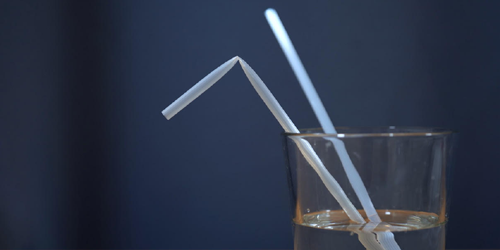 New theory promises to reshape how we think about polymer superstructures

Shaping the future of light through reconfigurable metasurfaces