Herschel Walker’s background has received a fair amount of scrutiny in recent months, and for good reason. The Georgia Republican is running for the US Senate despite having no meaningful background in government or public service, which makes scrutinizing his record all the more important.

The problem for Walker, however, is that the closer one looks at his personal and professional experiences, the less credible his first-time candidacy appears. The Associated Press reported over the weekend, for example, on the latest in a series of trouble areas: Walker has taken credit for creating a program called Patriot Support that provided support to veterans struggling with mental health.

But corporate documents, court records and Senate disclosures reviewed by The Associated Press tell a more complicated story. Together they present a portrait of a celebrity spokesman who overstated his role in a for-profit program that is alleged to have preyed upon veterans and service members while defrauding the government.

Eight years ago, Walker competed as a celebrity contestant on a game show, and he won a $ 50,000 prize to donate to his charity of choice. He picked Patriot Support, the program he claimed to help create.

In reality, Walker did not help create it – he was a paid celebrity spokesperson – and it was not (and is not) a charity. It was a program created years earlier by Universal Health Services, which paid the former football player a salary of $ 331,000 last year.

Complicating matters are the allegations raised against the program. From the AP’s report:

A sprawling civil case brought against Universal Health Services by the Department of Justice and nearly two dozen states alleges that Patriot Support was part of a broader effort by the company to defraud the government. Prosecutors allege Universal Health Services and its affiliates aggressively pushed those with government-sponsored insurance into inpatient mental health care to drive revenue …. To achieve this end, the company pushed staff at its mental health facilities to misdiagnose patients and falsify documents in order to hospitalize those who did not require it, according to court records. In other cases, they failed to discharge those who no longer needed hospitalization, according to the DOJ.

Two years ago, Universal Health Services denied the allegations, but reached a $ 122 million settlement with federal prosecutors and a coalition of states.

Remember, Walker bragged that he “started” this program, which was not true, and which does not appear worthy of boasts anyway. The Republican later conceded he did not actually create the program, despite his earlier claims to the contrary, but he told reporters that he did start Ascend Health’s Freedom Care program in 2007.

That also was not true.

The combination of false claims and controversial practices is an obvious problem for the Senate hopeful, compounded by the fact that there are so many similar stories in Walker’s background.

Circling back to our earlier coverage, the Associated Press reported last summer, for example, that Walker’s record includes “exaggerated claims of financial success” and a history of alarming business associates with his “unpredictable behavior.” The Atlanta Journal-Constitution published a related report in March, highlighting the false claims, lawsuits, and unpaid loans as part of Walker’s private-sector background.

The Daily Beast advanced the story last month, noting that the Georgia Republican “has established a parallel record of demonstrably false claims, many of which appear to bear no resemblance to reality whatsoever.”

Making matters slightly worse is the fact that Walker has very little to fall back on. He’s already made clear, for example, that he knows effectively nothing about public affairs. Voters have also learned about allegations of domestic violence and other dangerous personal behavior. He hasn’t even told the truth about his educational background.

As for Walker’s recent political rhetoric, he’s tried to argue that the late-Rep. John Lewis was a senator who’d oppose the John Lewis Voting Rights Advancement Act. We learned soon after that Walker had falsely claimed the FDA had approved an unproven “dry mist” mystery treatment for Covid-19. The Republican then said it was “totally unfair” to ask for his opinion about the bipartisan infrastructure law because he knew so little about it.

In March, Walker suggested the existence of apes calls evolutionary biology into question and seemed to argue that in-vitro fertilization does not work “because there has to be a God.” He tried to talk about energy policy a month later and offered a little more than a garbled word salad.

Steve Benen is a producer for “The Rachel Maddow Show,” the editor of MaddowBlog and an MSNBC political contributor. He’s also the bestselling author of “The Impostors: How Republicans Quit Governing and Seized American Politics.” 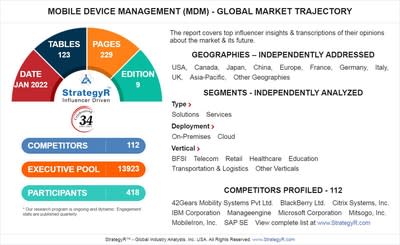 A $ 10.3 Billion Global Opportunity for Mobile Device Management (MDM) by 2026