It’s been a rough year for shareholders in Advanced Micro Devices (AMD -0.98%). The semiconductor stock has fallen about 40% year to date, which underperforms the Nasdaq Composite loss of 27.6%. But the price drop does not seem to be tied to business performance. AMD turned in an exceptional first-quarter earnings report recently and raised its full-year outlook.

The sell-off in AMD and other chip stocks seems like a preemptive move to get out before potential trouble starts. Investors have been concerned about a potential peak in demand for the semiconductor industry, given the recent COVID-19 lockdowns in China, ongoing supply shortages, and weak sales of personal computers (PCs).

Still, market dips create opportunities to buy stocks on the cheap before they go back up in a new bull market. There are several reasons to like AMD right now. 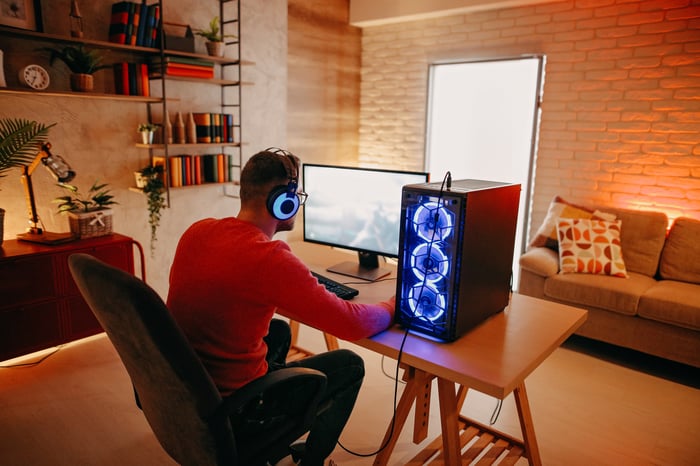 Going into the first-quarter report, investors were concerned about the health of PC sales, which have been strong since the pandemic began. The International Data Corp. (IDC) reported a 5% decline in PC sales in the first quarter. That report led to more selling in AMD shares right before its earnings report on May 3.

In the first-quarter report, AMD said it gained client processor revenue share for the eighth straight quarter. While CEO Dr. Lisa Su cautioned that the PC market is seeing some softness, she said, “our focus remains on the premium, gaming, and commercial portions of the market where we see strong growth opportunities, and we expect to continue gaining overall client revenue share.”

AMD looks even stronger in the server market. The enterprise, embedded, and semi-custom segment reported revenue of $ 2.5 billion, up 88% year over year, driven by EPYC server processors and custom chips made for Sony and Microsoft‘s video game consoles. This compares favorably against Intel’s data center group, which grew just 22% year over year in the first quarter.

AMD’s recent acquisition of Xilinx is another weapon to deliver growth and compete against Intel in advanced computing. The deal was finalized in March, so it only contributed a marginal amount of revenue for the quarter. However, it’s already packing a punch, contributing $ 559 million in revenue and $ 233 million in operating income. That’s a high operating margin of 42% and should bolster AMD’s earnings growth.

Xilinx makes adaptive chips and systems that are used for connected devices, self-driving cars, robots, and other applications that use artificial intelligence. Adaptive chips are in demand across these markets since they can be programmed by customers to meet specific needs.

The market is worried about a recession and slowing growth for leading chip stocks, but AMD’s guidance paints a different picture. Management is now calling for revenue to grow about 60% year over year in 2022. Analysts expect adjusted earnings per share to increase by 58% to $ 4.40, although it is uncertain whether analyst estimates are fully accounting for Xilinx yet.

Meanwhile, the stock’s forward price-to-earnings ratio of 20 looks incredibly low for a business with this much momentum. It’s a cheap valuation for any stock growth since the average company has historically traded in a P / E range of about 15 to 20. AMD is growing much faster than the average company, and because of that, the stock is a tempting buy at these levels.